Cloudy Day: a home for when the world turns gray 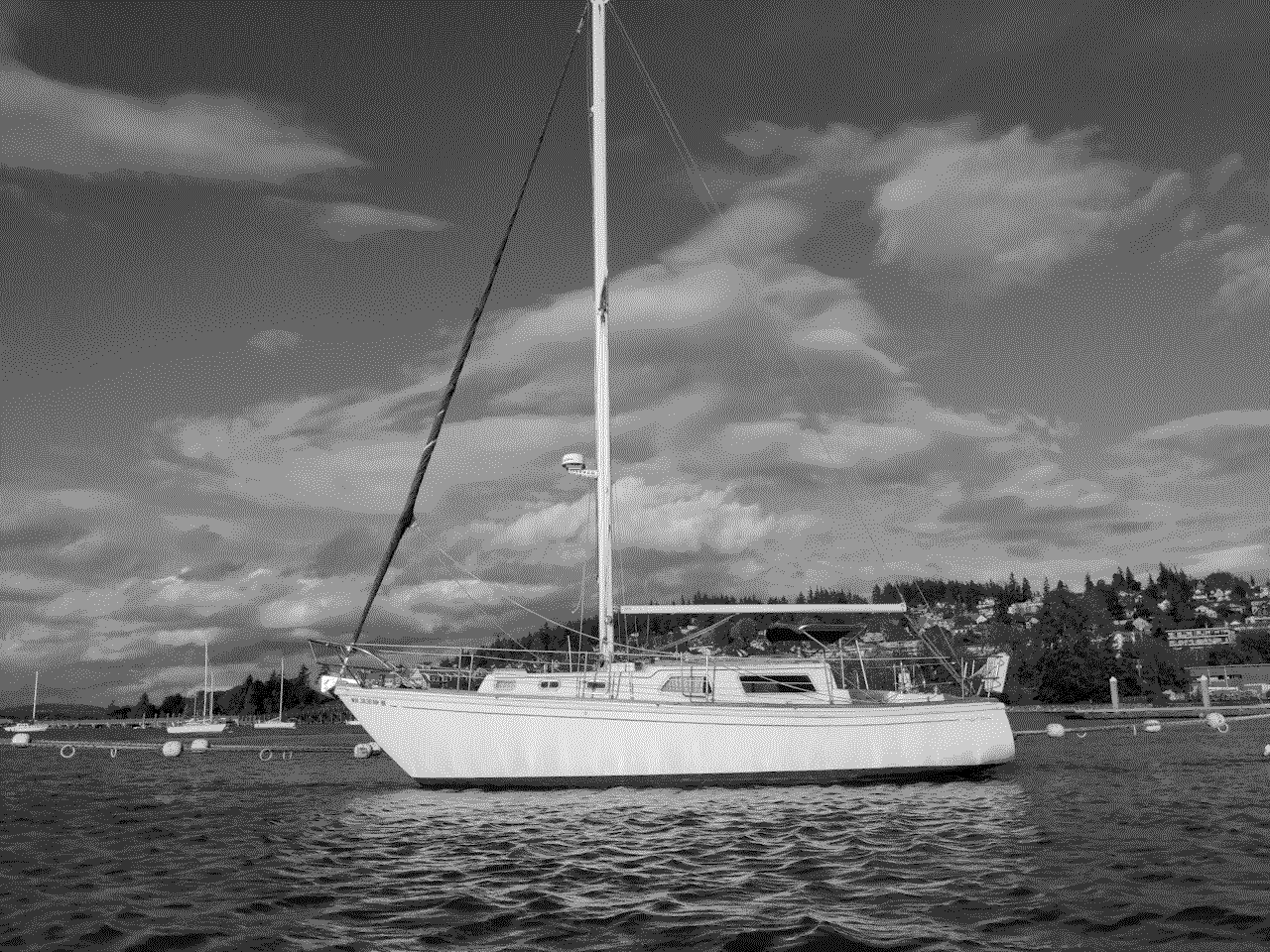 Cloudy Day is a 1971 Challenger 32 masthead-sloop sailboat (which, ironically, is actually about 33ft length overall), whose sailor-nerd specs can be found on SailboatData. It is also, as of fall 2022, my home.

Cloudy Day is actually my second sailboat, though the first was only briefly in my care: I learned to sail in spring/early summer 2021 on an unnamed-so-far-as-I-understood-things Clark San Juan 28 (I forget the exact model year - late ‘70s or early ‘80s). Realizing the boat wasn’t quite the one I wanted to invest tons of time or effort into (particularly, the electric motor refit I wanted to do), I parted with that SJ28 and purchased Cloudy Day.

I purchased Cloudy Day in Bellingham, WA in August of 2021 for about $10,000 USD1 in a Craigslist deal. At the time, she went by the name “Cara Mia”, evidently Italian for “My Beloved”. After day-sailing her around Bellingham Bay and surrounding waters through the rest of the 2021 season, she spent the winter first in Blaine Harbor, and then later in Squalicum Harbor back in Bellingham, largely unused while I tended to other matters in life.

The following summer (2022), I hauled Cloudy Day out for a rather extensive (underestimatedly so) and unfortunately-expensive electrical refit and a repowering which I intend to retroactively document here in the near future, replacing the Yanmar 3GM30F diesel engine (I hate fossil fuels and fossil fuels hate us all) with a 10kW 48V electric motor and a 280AH LiFePO4 battery bank (48V, 16s). While doing that work (and plenty more as it came up), I realized that for the first time in my life, I had a space that was completely mine, and a space I could make as cozy (or as rugged) as I wanted, with nobody to answer to but the sea. I never intended to be a liveaboard: indeed, when I bought Cloudy Day, I explicitly was looking for something “good enough for weekend or summer-holiday-week getaways, maybe with some company sometimes” and not much more. But alas, I decided that either the upcoming fall, or the following spring, I’d move aboard. Long logistics-heavy story short, I wound up finding winter moorage in Friday Harbor, WA for October 2022 to April 2023, and moved aboard full-time in late October - leaks in the ceiling (from deck fittings) and all :)

Here, friends, is where I pause this page for a moment - I’ll come back and fill in some of the alluded-to tangents and link-outs above over the winter, and in the coming summer, I should have plenty of adventures to chronicle aboard Cloudy Day to fill this page out more.